‘I’m a probate investigator’. That was the opening line of a guy who called my landline – unusual in itself because, well, who calls a landline anymore?
‘and I’m hoping to speak to a “David Thain”’
’You are doing’ I replied drily.
He went into his spiel. ‘According to our research one of your relatives died intestate some time ago and the estate is now being held by the Treasury. Our research leads us to believe that your mother is a potential heir to this estate.’ I immediately thought “scam”, but let him continue. 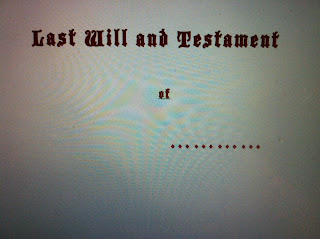 Without giving too much away he told me the year that my mother was born and that my great-grandfather – whom he named – had owned a farm on Romney Marsh. He had my undivided interest, because both facts were true. He then went on to tell me he had had to construct a complex family tree to eventually find me - the oldest son of my mother, the potential beneficiary. But he did not, and would not, tell me the name of the relative who had died intestate – only that he had died in the late nineteen eighties!
I felt sad that this relative of mine! had died almost certainly alone. And I felt guilty even though I couldn’t think who it could possibly be.
I asked the two obvious money questions:
How much is the inheritance worth? ‘More than £500.’
How much will it cost? ‘I take 5% of the inheritance.’
We didn’t go much further but he’s now going to send me a package – and a contract!
What I didn’t tell him was that my great-grandfather was given the farm when he broke with his family to marry my great-grandmother and he was then set adrift. Unfortunately he went to drink and lost the farm and, subsequently, my grandmother spent three years in the equivalent of the workhouse when she was eleven years old!
I’ll keep you posted.